Under Your Nose: Archive Finds at Home

Welcome to the new Renaissance Perspectives blog! The purpose of this blog is to share thought-provoking material and research about the Renaissance. To that end, I will be posting a few times during each semester as I come across information that piques my interest.

This first post has to do with a personal—and accidental—find. Because I’m interested in early modern religious literature in Spain and Latin America, I was searching Indiana University’s library catalogue for a Spanish translation of Stimulus Amoris, a thirteenth-century book originally written in Latin. Upon coming across what looked like a good possibility, I requested a book that was in the Auxiliary Library Facility, anxiously waiting to see if my suspicion was true.

Oddly, when I went to pick up the book, it was delivered to me in an envelope. As I peaked inside, I was taken aback when I saw the cover was of vellum. The book turned out to be an early eighteenth-century Barcelona edition of a 1592 volume with a long title that indicated there were two works within it: Arte Poética Española con una fertilissima sylva de consonantes comunes, proprios, esdruxulos, y reflejo, y Un Divino Estimulo del Amor de Dios (Figs. 1 and 2).1 Although the entire book appeared to be by Juan Díaz Rengifo, further investigation showed that he used a pseudonym, and that the second book, Divine Stimulus of God’s Love, was actually written by Fray Luis de León.2 Despite the fact that it wasn’t the translation I was searching for, the book surprised me in several ways.

As a poetry manual, the first section explains various poetic forms and meters, giving brief examples of each. The Divine Stimulus is then offered as a more extensive example of the application of rhyme and meter. The final part of the book has a glossary of rhyming words to be used in writing poetry with the silva meter, which is the main focus of the text. As you can see from the accompanying photographs, foldout acrostics, puzzles, and games are whimsical additions to this book, but Joseph Vicens apparently added these in later printings.3 The foldouts might be considered precursors to concrete poetry, a 1950s Brazilian movement that arranged letters and lines of poetry to make visual shapes.

Aside from the dedication and title page in the first two photographs, we can see in the third a playful acrostic dedicated to St. Thomas Aquinas in which a simple phrase is adjusted by one letter on each line, resulting in the full phrase appearing on all four edges of the rectangular text (Fig. 3). Likewise, the same letter repeats throughout the composition if we look diagonally from top left to bottom right. In the fourth image, lauding a graduating doctor, the last name is spelled backwards so it reads “en ave(s),” meaning in bird, as well as spelling it in correct order as Sevane (Fig. 4). 4 The seven letters of the word are also highlighted in large, bold type within the poem to visually form an “x” across the page, once again spelling out “Sevane en aves.” Similarly, the first letter of each line on the left margin, reading downwards, repeats the same phrase. 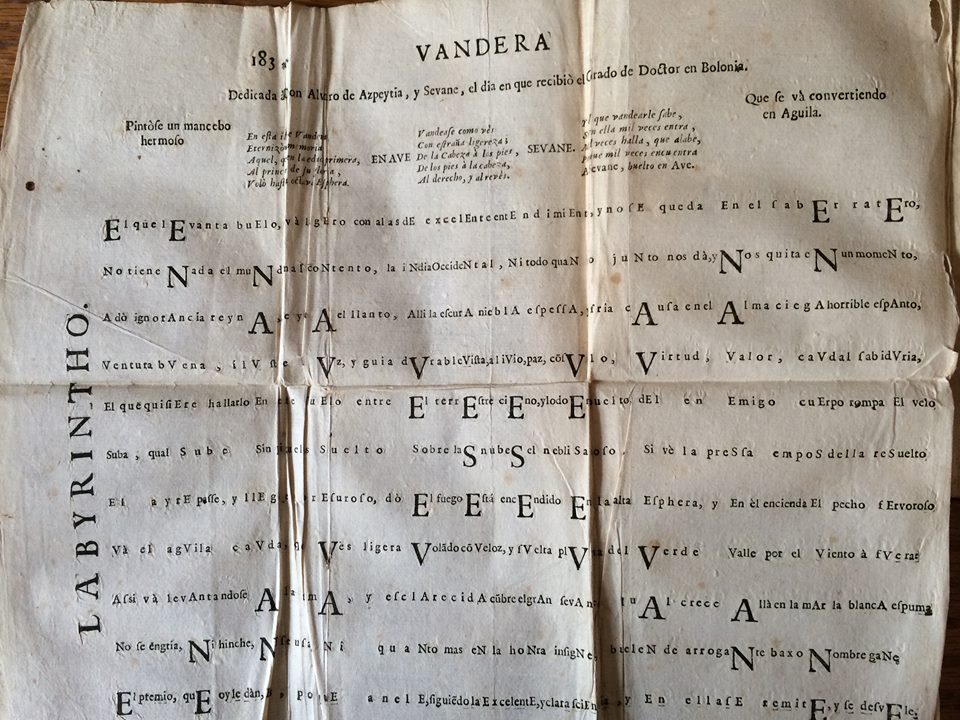 The fifth photograph from the book indicates the page is a game of “chess” (Fig. 5). Through small poems about the birth of Jesus, there’s a mystery to be found, for the clue on the right side of the title challenges the player/reader to locate the consonant among the feet, surely referring to poetic feet. On the left side, the player is informed that there are “no more than twenty-five,” and this number corresponds to the quantity of verses. S/he is then asked to count something—the phrase doesn’t say what—that adds up to 5,500. At first I thought it would be the number of letters, but I calculate there are roughly 2,500 of them. Perhaps one of you can figure it out! 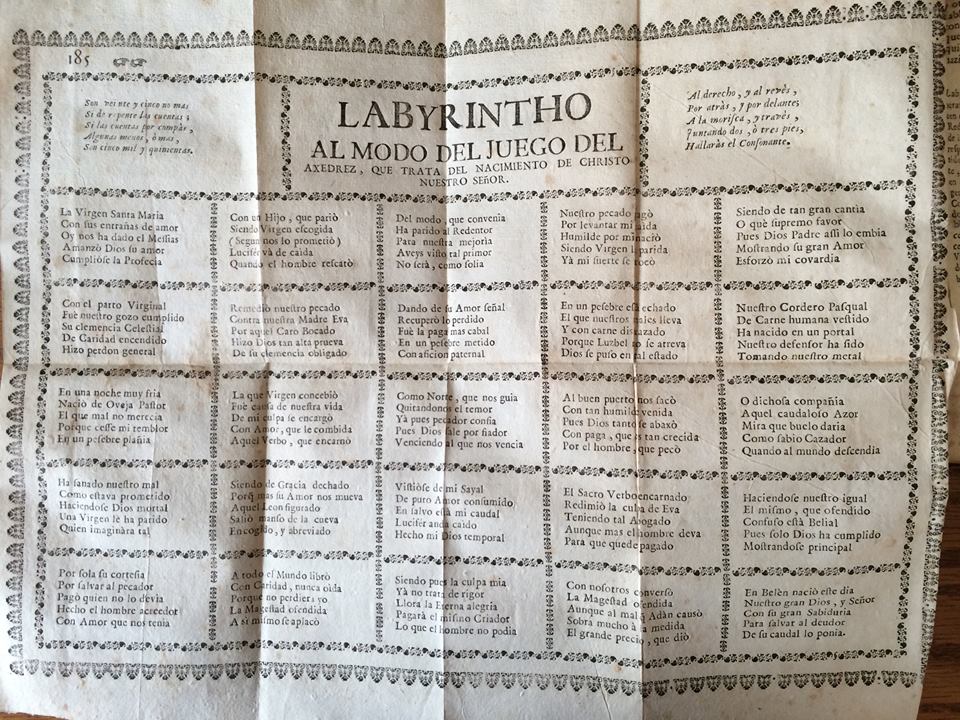 Interestingly, in 2012, Edition Reichenberger, a German press, published a modern edition of the original 1592 book.5

After thoroughly reviewing my discovery, it was delivered to the Lilly Library, where I knew it truly belonged. As it turned out, the Lilly already had a copy of this book, but I’m sure the library will be happy to have another. It seems that sometimes you don’t have to go far to encounter something special in an archive. Sometimes, as the saying goes, “There’s no place like home.”

Having recently completed an M.A. in European Studies at Indiana University, Rowena Galavitz is the 2016-17 Renaissance Studies Graduate Fellow, as she begins the doctoral program at IU in Religious Studies and Comparative Literature. Her academic interests include convent writing, mystical literature, sainthood, gender, and sexuality in late medieval Europe, early modern Spain, and colonial Latin America.